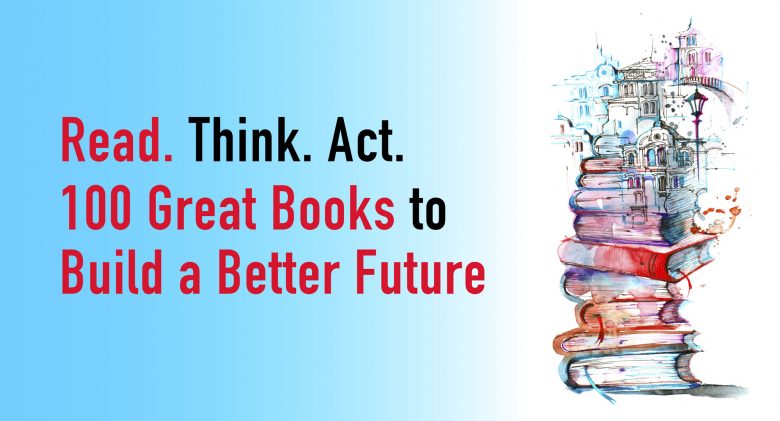 What Are the “100 Great Books for a Human Future”?

What are the 100 best books to help humanity prepare for the challenges of the human future? Which can best train our minds—showing the problems, the possibilities, the hope—as we try to build a world that we’ll be proud to pass along to our children and grandchildren?

Books have a power to help shape the mind. When writing, an author leaves a trace of their neural activity encoded in words. Readers then decode the words—re-hydrating this “freeze-dried” form of thought and producing fresh patterns of neural activity in their own minds as they accept, reject, or modify ideas gleaned from the text. In this way, written words let ideas jump across continents and millennia, allowing us to commune with some of the great minds in human history and with great minds all over the planet.

And, for ages, people have been selecting and sharing texts of exceptional wisdom. For some, this list would begin with a sacred, religious text—perhaps the Talmud, the Christian Bible, the Quran, the Sutras of Buddha, or the Hindu Vedas. For others, it might be the works of Homer, Plato, Thucydides, Cicero, Virgil, Shakespeare, Cervantes, Tolstoy, Dante, Darwin or others from the “great books” of Western civilization.

But the pressure of the modern economic system—the challenge of getting and keeping a job—makes students increasingly reluctant to major in the humanities and increasingly likely to study biotechnology or computer science. In these realms, students may focus on books like Molecular Biology of the Cell(Bruce Alberts et al.), Artificial Intelligence (Stuart Russell and Peter Norvig), Deep Learning (Ian Goodfellow et al.), How to Create a Mind (Ray Kurzweil), or a famous white paper on bitcoin and blockchain that was written under the pseudonym “Satoshi Nakamoto.”

I see the need for a new reading list, combining these realms, and also helping prepare us to deal with the global challenges of the modern age. We have challenges today that Plato and Thucydides had no way to foresee, problems such as climate change, environmental degradation, the rise of artificial intelligence, and the risk of nuclear war.

So what makes a book worthy of such special attention? What criteria can we use to select? To start, it is important to acknowledge that there is no central text (no one “bible”) telling us how to proceed as we try to ensure a livable human future amidst the complexity of the 21st century. No one has yet offered a plan, but we’re fortunate to have many “advisors” who’ve studied parts of the problem.

Our own choice of best books, i.e., the best members for this advisory team, reflects the key concerns and key goals of our work at Humanity 2050. This vision:

Thus, our library of 100 books for the human future must recognize the full spectrum—the progress, the potential, and the perils,

Given the goals of Humanity 2050, these books should showcase human freedom and dignity, highlighting the possibility for prosperity without overwhelming our planet’s resources. They should reflect a worldview that accepts and celebrates all—religion, humanism, science, and technology.

With this rough guidance laid out, I now propose 10 shelves with these books for humanity, and start by suggesting a few books for each of these shelves. With these examples, I hope to set the tone and to start a discussion about which other books to include. (Obviously, those imaging a transhumanist future, or those preparing to move to Mars, will need to assemble their own reading lists, very different than the one started here. There’s not much point in getting the bookshelves jumbled together, or in arguing about specific authors, when the real point of departure comes via a fundamentally different choice of priority and purpose.)

Shelf 1: I’d start with a few books giving an overview of human origins, human history, and the human condition. We might begin with The Origin of Species (Charles Darwin), Sapiens: A Brief History of Humankind (Yuval Noah Harari), Collapse: How Societies Choose to Fail or Succeed (Jared Diamond), and The Human Condition (Hannah Arendt).

Shelf 3: Of course, human history has also been marked by the horrors of war, totalitarianism, and genocide. So our third shelf might start with War and Peace (Leo Tolstoy), Eichmann in Jerusalem (Hannah Arendt), On Tyranny (Timothy Snyder), Hiroshima (John Hersey), Thinking about the Unthinkable (Herman Kahn), Cyber War (Richard A. Clarke and Robert K. Knake), LikeWar: The Weaponization of Social Media (P.W. Singer and Emerson T. Brooking), and 1984 (George Orwell).

Shelf 4: Next comes the role of religion, mindfulness, and meditation in the modern world. Regardless of our own individual beliefs, we need to understand this key aspect of human life and human society, and we thus begin our fourth shelf with The Varieties of Religious Experience (William James), Religion: What It Is, How It Works, Why It Matters (Christian Smith), The Art of Happiness (Dalai Lama), and with a set of sacred texts from the major religions around the world. We also consider secular ideas about morality, law, and social justice, including A Theory of Justice (John Rawls), Ethics for the Real World (Ronald Howard and Clinton Korver), and Ethical Know-How (Francisco Varela).

Shelf 5: To explore the beauty of (at least one branch of) art, to acknowledge the power of the human spirit, and the importance and meaning of love, I’d start shelf number five with The Divine Comedy (Dante); and Hamlet, King Lear, and The Tempest(Shakespeare). Obviously, choices here are far more personal—and there will be huge cultural differences—but I’d also include the collected poems of Emily Dickinson and of Walt Whitman, A Room of One’s Own (Virginia Woolf), Man’s Search for Meaning(Viktor Frankl), and A General Theory of Love (Thomas Lewis et al.).

Shelf 6: Turning to recent changes in science, technology, and communication and their effects on society, I’d start shelf six with The Fourth Industrial Revolution (Klaus Schwab), Superintelligence (Nick Bostrom), The Shallows: What the Internet is Doing to Our Brains (Nicholas Carr), The Filter Bubble (Eli Pariser), The Inevitable: Understanding the 12 Technological Forces that Will Shape Our Future (Kevin Kelly), and The Second Machine Age: Work, Progress, and Prosperity in an Age of Brilliant Technologies (Erik Brynjolfsson and Andrew McAfee).

Shelf 7: In a similar way, shelf seven will have a collection of references on humanity’s impact on nature and the environment (including related concerns about population growth). Books here will include Silent Spring (Rachel Carson), Limits to Growth(Donella Meadows, Dennis Meadows, et al.), The World is Blue (Sylvia Earle), The Climate Casino (William Nordhaus), The Sixth Extinction (Elizabeth Kolbert), Drawdown (Paul Hawken, editor), and 2052: A Global Forecast for the Next Forty Years (Jorgen Randers).

Shelf 8: This continues on closely related themes, building on the ideas of the previous shelf to look toward the future, to consider how to feed and house and protect all these billions of people. Books here will include The Triumph of the City (Edward Glaeser), The Death and Life of Great American Cities (Jane Jacobs), Urbanism in the Age of Climate Change (Peter Calthorpe), Water: The Epic Struggle for Wealth, Power, and Civilization (Steven Solomon), Global Health Care Issues and Policies (Carol Holtz, editor), and Global Food Futures: Feeding the World in 2050 (Brian Gardner).

Shelf 9: No list would be complete without a look at the power and limits of human cognition, including a discussion of strategic thought. This shelf might include Thinking, Fast and Slow (Daniel Kahneman), Thinking in Systems: A Primer (Donella Meadows), Predictably Irrational (Dan Ariely), The Checklist Manifesto (Atul Gawande), The Nature of Scientific Revolutions(Thomas Kuhn), Superforecasting (Philip Tetlock and Dan Gardner), The Art of War (Sun Tzu), and On Grand Strategy (John Lewis Gaddis).

Shelf 10: And finally, we need a shelf on economics to consider classical ideas of capitalism, to explore issues of poverty and inequality, and to consider changes that may be needed for a new age on Spaceship Earth. I propose starting this shelf with The Wealth of Nations (Adam Smith) and Capital in the Twenty-First Century (Thomas Piketty). Trying to give some balanced view of progress and problems, I’d then include Factfulness (Hans Rosling et al.), This Changes Everything: Capitalism vs. the Climate(Naomi Klein), Donut Economics (Kate Raworth), and Banker to the Poor (Muhammad Yunus).

For me, assembling this list and reading these books is a way to help prepare the mind to address some of the most fundamental questions of the modern age. While many wonderful people are doing great work to help solve societal problems, there is still much work to be done. We cannot pitch in and work effectively without learning as much as possible to help focus our efforts. Books can help create a society-wide neural scaffolding that will give us a better toolkit for creating a flourishing, positive future. Society needs some way to assemble the best advice we can get from minds all over the planet, and we hope to get your help in refining and filling out this bookshelf. (Please send any comments and suggestions to ideas@humanity2050.org; we’re especially eager to hear from anyone who has read enough on these subjects so as to already have one or two bookshelves full of their own well-worn favorites.)

« How a Notebook Empowers Thought
Civilization and the Complexity Trap »